Round here we love the opportunity to veggieatizer or veganize just about anything and the meatier the better.

So when Marly, from the super lovely blog Namely Marly, contacted Veggie num num a couple of weeks ago with the idea to tackle a vegan sandwich project I was pretty excited!

Along with a little troop of adventurous veggie bloggers Marly planned on veganizing America’s Top 10 New Sandwiches as featured by the Huffington Post and so far the results have been fantastically delicious.

The series has been dubbed America’s Top 10 New Sandwiches… Veganized and this here is Veggie num num’s contribution.

The original sandwich, The Crispy Drunken Chicken Baguette, comes from Baguette Box in Seattle (a long way from south east Queensland Australia) and features on their menu as battered crispy chicken with sweet tangy sauce, caramelized onions and cilantro on a baguette.

So on to the veganization and after recipe hunting, brainstorming and a few exchanged emails with my culinary genius of a brother in law (thanks Clayton the resulting recipe was something of a monster with four separate parts but oh boy the sandwich, it’s seriously good!

Marinated tofu, battered and deep fried and then tossed in a sweet tangy sauce piled into a toasted baguette and topped off with sticky caramelized onions and fresh coriander, yes good, very good!!

Head over to Namely Marly to check out the recipe and her wonderful blog, plus make sure to keep your eye out for the entire series of Americas Top 10 New Sandwiches… Veganized!! 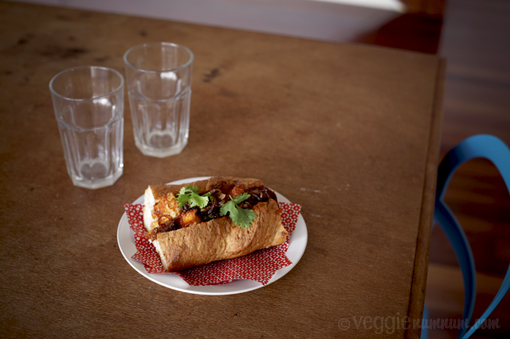