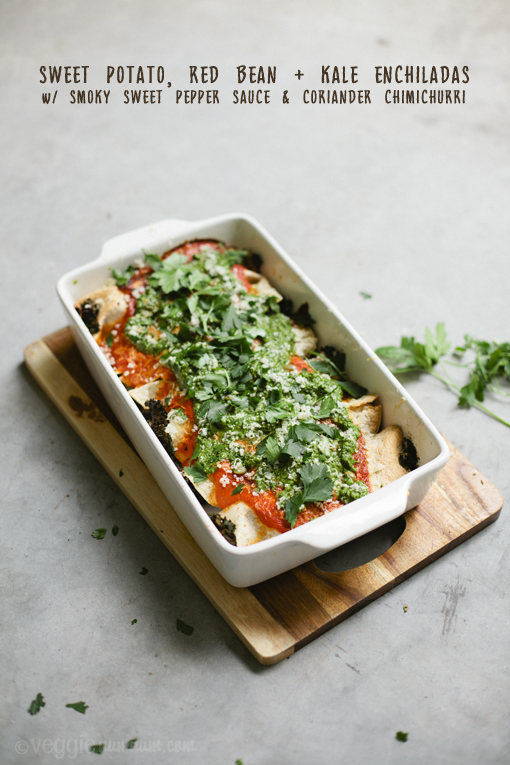 Sweet potato is one of my absolute favourite ingredients and we usually eat it every week, sometimes more than once, in lots of different forms. Years ago, when we lived on a bigger piece of land, we had a sweet potato patch that covered a good corner of our yard. It produced loads of the beautiful purple skinned variety with their perfect sweet taste, most especially good for baking.

I’ve used sweet potato in both tacos and quesadillas before so it was time to add them to another favourite, the vegan enchilada. While I’m pretty sure what we call an enchilada here in Australia is quite different to a traditional Mexican enchilada, I’m going to go ahead and call these vegan enchiladas anyway.

Basically we’ve got cumin roasted sweet potato and grilled corn, rolled up in a soft tortilla with a red bean hummus and braised kale all topped off with a smoky sweet pepper sauce and zingy coriander chimichurri, trust me it’s all pretty dang good.

It takes a little time to put together the different elements of this vegan enchilada recipe, but the added effort to make everything from scratch really pays off. The flavours are smoky and robust and match perfectly with the fresh and zingy chimichurri.

I used a combination of purple skinned sweet potato and kumara here, but either would work well. Both corn or wheat tortillas are perfect for this dish and use your favourite vegan cheese if you avoid dairy.

These vegan enchiladas are full of flavour and make a great family dinner accompanied with a quick fresh tomato salsa and/or some Mexican rice. Or serve them up to your friends for a veg friendly Mexican feast.. enjoy!! 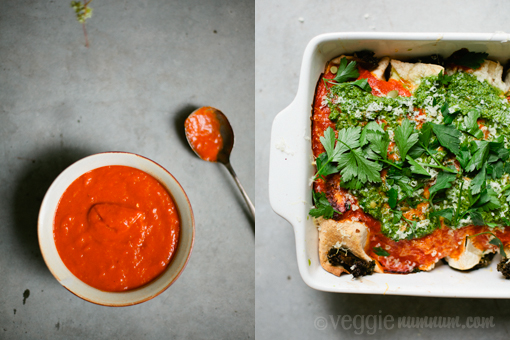 Throw the cubed sweet potato into a roasting pan. Dust over the ground spices, a good pinch of salt flakes and a few cracks of fresh pepper. Drizzle over the olive oil and the honey or maple syrup. Toss the pan, or stir with a spoon, to coat the sweet potato evenly with oil, honey/maple syrup and spices.

Place in the preheated oven for around 30 minutes until golden and tender. Remove form the oven and set aside to cool.

Meanwhile prepare the corn. Heat the sunflower or rice bran oil over a medium/high heat on a barbeque or stovetop grill pan. Add the cobs of corn and sprinkle over the cayenne pepper, turning the cobs to coat evenly. Sprinkle over a little salt flakes and cracked pepper and grill the corn over a medium/high heat turning as they brown and blacken. Be careful as the corn may spit and pop as it cooks. Remove the corncobs once a lovely dark golden on all sides. Set aside to cool.

Once the corn is cool enough to handle, remove the corn kernels from the cob by standing the cob on its end and sliding a knife down the length of the corn. 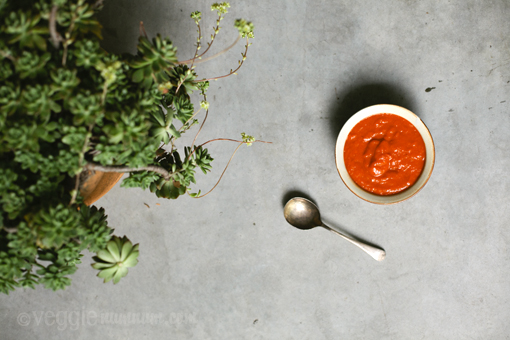 || Note: Sweet Peppers, sometimes called Italian Sweet Peppers, are the long variety of capsicums or peppers. They look like a large red chili, but have the mild flavour of a capsicum (pepper). Simply use 2 more red capsicums (bell peppers) if you can’t find this variety. ||

Slice the peppers and capsicums in half lengthways. Scoop out the seeds and membranes and lay on a baking tray skin side up. Place the whole, un-peeled, garlic cloves under two of the capsicum halves to stop them from burning. Drizzle over the olive oil and place in the preheated oven at 200°C/390°F.

You can roast the peppers and capsicum at the same time as the sweet potato. Roast for around 25 minutes until their skins are blackened and the flesh soft. Remove from the oven and allow to cool completely.

Once the capsicum and peppers are cool enough to handle, roughly peel off their skins and throw the flesh in a food processor or blender. Squeeze one of the garlic cloves from its skin and add to the roasted peppers and capsicum (save the other two for the red bean hummus).

Add the juice of half a lime and a tiny drizzle of honey or maple syrup, adding salt flakes and pepper to taste. Blend until smooth, taste test and add more lime juice to taste. Set aside.

Heat a heavy-based frying pan over a low heat. Throw in the coriander and cumin seeds and dry roast for a minute or two until fragrant. Remove from the pan and using a mortar and pestle grind to a fine powder (alternatively you could skip this step and use already ground spices).

Heat the 1 tablespoon of sunflower or rice bran oil in the same pan over a medium heat. Add the ground spices including the paprika and fry in the oil for just a minutes before adding the drained beans. Fry the beans, tossing in the spices and oil for around 4-5 minutes until fragrant. Remove from the heat and allow to cool.

Transfer the cooled beans to a food process with the olive oil, the two reserved roasted garlic cloves (peeled) and the juice of ½ a lime. Blend until you have a thick hummus consistency. Taste test, adding salt flakes and pepper to taste with more lime juice if you prefer.

This bean hummus makes a great accompaniment to corn chips too!!

Heat the broth or water over a medium/high heat in a large saucepan or frying pan. Once simmering, add around half the kale and allow to wilt down a little before adding the remainder. Cover with a lid and simmer over a low heat for around 5 minutes. Remove the lid and turn up the heat for a few minutes until the remaining liquid evaporates and kale is tender. Set aside.

Add all the ingredients, along with a good pinch of salt flakes and cracked pepper, to a food processor and blend until smooth. Set aside. 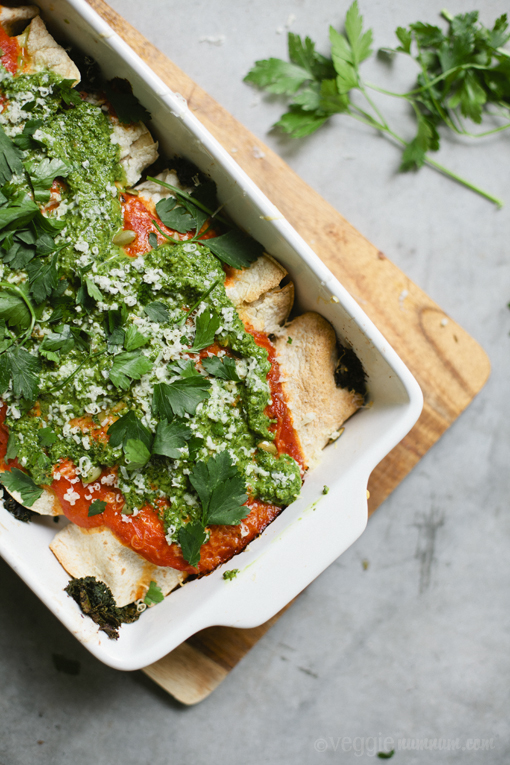 Place a single tortilla on a clean work surface. Spoon on one-sixth of the bean hummus and spread evenly. Lay a few of the braised kale leaves down the center and then top with one-sixth of the sweet potato and corn mixture. Roll up the tortilla and place in a large baking dish with the folded side face down. Repeat with the remaining tortillas placing them side-by-side in the baking dish.

Pour over the prepared sweet pepper sauce and then top with around 1-1½ cups of grated cheese and sprinkle on the pumpkin seeds. Place in the preheated oven for around 25 minutes until cheese is melted and enchiladas heated through.

Remove from the oven and pour over the coriander chimichurri. Grate over a little more cheese and then garnish with a good handful of torn coriander leaves and the sliced green chili, if using.

Serve warm accompanied with a fresh tomato salsa and/or Mexican rice if you prefer.